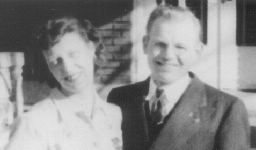 It was a time of Harry James and Betty Grable; a time of seams in the ladies stockings, of Rosie the Riveter, ration stamps for gasoline, shoes, fuel oil, sugar and tires.

It was a time of the 35-mile per hour speed limit to conserve gasoline and tires, and a time when all the church bells rang in all the little towns for all the people to come to pray for the success of the Normandy invasion. It was a time when couples married hurriedly in order to have a few days of married bliss before he went off to war.

Such a marriage was that of Luther and Jenny. They had dated all through high school in the little town of Miller, Missouri. She was a cheerleader, and he was captain of the basketball team, both known and loved by all the townspeople in that little community of 600.

Then Luther got his draft notice. They married quickly and rented a tiny house at the north end of town, near the end of the railroad spur that came from Mt. Vernon, the larger town eight miles to the south.

The townspeople watched Luther off on the train, and Jenny went back to the little house to wait for his return. Luther’s letters to her came daily at first, then sporadically after he reached Europe where he was a bombardier on a B-17 bomber. Jenny would carry his letters with her and read them not only to her friends, but to anyone in town who would listen, and everyone would. Jenny kept the little house clean, the lawn mowed, the flower garden cultivated – all in anticipation of Luther’s return.

The telegrams began to arrive. Will Johnson had been killed, Perry Abiattia had both hands blown off when he picked up a land mine, Herschel Sexton had been shot and had a plate in his head and his Purple Heart had been sent to his wife, Dixie, who showed it to all the townspeople and wept over it.

Still, Jenny said that Luther would come home safely. She knew it. Two years went by. We little boys played our war games. We would run about holding our arms outstretched, making airplane noises and dropping imaginary bombs on imaginary targets.

“My dearest Jenny,” it said, “We will be ferrying our B-17s across the United States to California. I will ask my pilot to break formation and fly over Miller and your house. Be out front on April 3rd at 10am.”

Now, none of us in that area had ever actually seen a B-17. We had seen that giant airplane only on recruitment posters and movie newsreels. The word flashed across Mt. Vernon, Aurora, Greenfield, Lockwood and several other little towns in the area, and on the appointed date, at least 6000 people had gathered in front of Jenny’s house, many having left their cars parked nearly two miles away.

The people left a large opening in front of Jenny’s house where she stood awaiting this monumental event. I think I was about 7 years old then, and I stood holding onto my mother’s hand, waiting.

We heard it long before we saw it. The roar of those giant engines began to build up until it nearly deafened us, and then there it was. Just over the trees, from the east, nose high, flaps down, wheels down, bomb bay doors open, the huge propellers clawing the sky. It seemed to just hang there, and yes! We could see Luther in the bomb bay as he waved at us!

The gigantic war machine banked to the left, flew around the water tower and made another pass. This time Luther dropped a small supply parachute which opened just a few feet in front of Jenny. It had a small box attached. Jenny ran to it, picked it up and ran to the house. She later made a dress of the parachute, it was of the camouflage type, and wore it proudly around town.

Yes, that amazing scene took place over 50 years ago, and most of those who witnessed it are now dead, but Jenny and Luther’s love for each other never died.

As a matter of fact, I just saw them last week. They are still together, enjoying a love that to this day is as big as that B-17 we stood and watched in awestruck wonder.

We may have come from a small town, but our memories and our feelings run very, very deep.

~ The Author is the late Joe Edwards from Missouri who was a semi-retired Jazz pianist. He played all over the country. His primary base was Kansas City, known as the home of good jazz. Joe often wrote about his little hometown of Miller, Missouri. ~