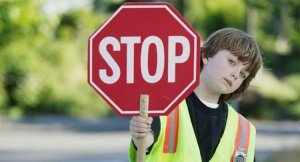 “I don’t need anyone telling me when to cross the street,” I yelled defiantly at the fourth grade Safety Patrol.

I said in my roughest, toughest ten-year-old voice. With that, I crossed the street and made my way home. The next morning I was called to the principal’s office. I was a bit scared but tried my best not to show it.

“You know Mike, this is the third time I have had a complaint about you not obeying the Safety Patrols at the intersections.”

I said nothing in response.

“The Safety Patrol members are there to make sure that no one gets hurt.”

“I don’t need anyone telling me when to cross the street. I’m not a two-year-old, you know.”

“Mr. Powers, I don’t care how old you are, or even think you are. You are going to start listening to and obeying the Safety Patrol, or you and I will be spending a lot of time together. Is that understood?”

I nodded and then was dismissed. I clenched my little fists together all the way out the door.

I was Public Enemy Number one to the Greenbrook Elementary School Safety Patrol. The mere mention of my name made those fourth graders, who proudly wore the orange Safety Patrol vests, break out into a cold sweat.

It was soon after that, that I was approached by fellow fourth grader and captain of the Safety Patrol, Mike DiSalvo. I started to growl under my breath as he approached, and I prepared myself for an argument when he began to speak.

“Hey, Mike! I’ve got a question for you. I noticed that you don’t seem to need any help getting across the streets before and after school.”

“Well, Mike, since you are one of the few who don’t need our help, I was wondering if you would like to join us? You know, become a member of the Safety Patrol. That way you can help all the other students get safely across the street.”

The defensive reply I had planned froze on my lips and I stood there totally stunned. After what seemed like an hour I finally stammered,

Within a few weeks I was the most devoted Safety Patrol member Greenbrook Elementary School ever had, and I wore my orange vest with pride. I showed up on my scheduled street corner ten minutes early each morning.

I grew to love being in the Safety Patrol even more when, at the end of the year, we were rewarded for our service with a trip to Wrigley Field to watch my favorite baseball team, the Chicago Cubs. it was a magical day that all of us kids will never, ever forget, especially me. If it weren’t for a fourth grader named Mike DiSalvo who was wise far beyond his years, I would not have been there that day to experience my first Cubs game.

I have lost track of my childhood friends. However, my guess is that Mike DiSalvo is the CEO of some Fortune 500 company, and that he regularly gives out Cub tickets to schools to be used by the brave young boys and girls of the Safety Patrol.

~ The Author is Michael T. Powers used with permission. Mike is the youth minister at Faith Community Church in Janesville, Wisconsin, and author with stories in 26 inspirational books. To preview his book or to join his inspirational e-mail list, visit: HeartTouchers.com ~

2 thoughts on “Wise Beyond His Years”