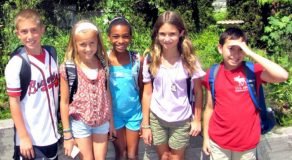 Donna’s fourth grade classroom looked like many others. My job was to make classroom visitations and encourage implementation of a training program that would empower students to feel good about themselves and take charge of their lives.

I took an empty seat in the back of the room and watched. The students were filling a sheet of notebook paper with determination and persistence witha list of “I Can’ts.”

“I can’t kick the soccer ball past second base.”
“I can’t do long division with more than three numerals.”
“I can’t get Debbie to like me.”

The activity engaged my curiosity, so I decided to check with the teacher to see what was going on, but I noticed she too was busy writing.

Why were the students and teacher dwelling on the negative instead of writing the more positive “I Can” statements?

The students were then instructed to fold the papers in half and bring them to the front and placed their statements into an empty shoe box. Then Donna added hers. She put the lid on the box, tucked it under her arm and headed out the door and down the hall.

The digging took over ten minutes because most of the fourth graders wanted a turn. The box of “I Cant’s” was placed at the bottom of the hole and then quickly covered with dirt. Thirty-one 10 and 11 year-olds stood around the freshly dug grave site. At this point Donna announced,

“Boys and girls, please join hands and bow your heads.” They quickly formed a circle around the grave, creating a bond with their hands. They lowered their heads and waited. Donna delivered the eulogy.

“Friends, we gathered here today to honor the memory of ‘I Can’t.’ While he was with us here on earth, he touched the lives of everyone, some more than others.

We have provided ‘I Can’t’ with a final resting place. He is survived by his brothers and sisters, ‘I Can,’ ‘I Will,’ and ‘I’m Going to Right Away.’ They are not as well known as their famous relative and are certainly not as strong and powerful yet.

Perhaps someday, with your help, they will make an even bigger mark on our world. May ‘I Can’t’ rest in peace and may everyone present pick up their lives and move forward in his absence. Amen.”

She turned the students around, marched them back into the classroom and held a wake. They celebrated the passing of “I Can’t” with cookies, popcorn and fruit juices.

Donna cut a large tombstone from butcher paper. She wrote the words “I Can’t” at the top and put “RIP” in the middle. The date was added at the bottom. The paper tombstone hung in Donna’s classroom for the remainder of the year.

On those rare occasions when a student forgot and said, “I Can’t,” Donna simply pointed to the RIP sign. The student then remembered that “I Can’t” was dead and chose to rephrase the statement.

I wasn’t one of Donna’s students. She was one of mine. Yet that day I learned an enduring lesson from her as years later, I still envision that fourth grade class laying to rest, “I Can’t.”

2 thoughts on “The Fourth Graders’ Tombstone”