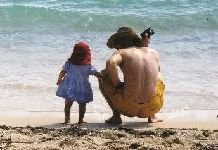 For 52 years my father got up every morning at 5:30am except Sunday and went to work. For 52 years he returned home at 5:30pm like clockwork for dinner at 6:00pm. I never remember my father taking a “night out with the boys,” nor do I ever recall my father drinking.
All he asked from me as his daughter was to hold his hammer while he repaired something just so we could have some time to talk to each other. I never saw my father home from work ill, nor did I ever see my father lay down to take a nap. He had no hobbies other than taking care of his family.
For the 22 years since I left home for college, my father called me every Sunday at 9:00am. He was always interested in my life, how my family was doing, and I never once heard him lament about his lot in life. The calls even came when he and my mother were in Australia, England or Florida.
Nine years ago when I purchased my first house, my father, 67 years old, spent eight hours a day for three days in the 80-degree Kansas heat, painting my house. All he asked, was a glass of iced tea, and that I hold a paint brush for him and talk to him. But I was too busy, I had a law practice to run, and I could not take the time to hold the paint brush or talk to my father.
Five years ago at age 71 again in the sweltering Kansas heat, my father spent five hours putting together a swing set for my daughter. Again all he asked was that I get him a glass of iced tea and talk to him. But again, I had laundry to do and the house to clean.
Four years ago my father drove all the way from Denver to Topeka with an eight foot Colorado Blue Spruce in his trunk, so that my husband and I could have a part of Colorado growing on our land. I was preparing for a trip that weekend and couldn’t spend much time talking to Daddy.
The morning or Sunday, January 16, 1996, my father telephoned me as usual, this time from my sister’s home in Florida. We conversed about the tree he had brought me, “Fat Albert,” but that morning he called the tree “Fat Oscar,” and he had seemed to have forgotten some things we had discussed the previous week. I had to get to church, and I cut the conversation short.
The call came at 4:40pm that day, my father was in the hospital in Florida with an aneurysm. I got on an airplane immediately, and on the way, I thought of all the times I had not taken the time to talk to my father.
I realized that I had no idea who he was or what his deepest thoughts were. I vowed that when I arrived, I would make up for the lost time and have a nice long talk with him and really get to know him.
I arrived in Florida at 1am. My father had passed away at 9:12pm four hours earlier. This time it was he who did not have time to talk nor time to wait for me.
In the years since his death I have learned much about my father and even more about myself. As a father he never asked me for anything but my time, now he has all my attention, every single day.
~ Author Unknown ~