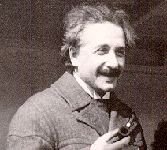 When Jerome Weidman was young, he was invited to visit a rich old friend who had a lovely big home. After supper that evening they went through to the drawing room. Other guests were pouring in and the servants were arranging chairs for a musical recital. Jerome said he was not able to listen to heavy music and sat with some ear plugs in his ears. At the first interval he took out his ear plugs.

An old gentleman sitting next to Jerome took him by the arm and led him to an upstairs room, which was a book-lined study. The old gentleman introduced himself as Albert Einstein.

“Tell me,” said Einstein, “Is there any kind of music that you do like?”

Einstein proceeded to put a record on the turntable. Jerome knew the voice and the music, it was Bing Crosby’s “When the Blue of the Night Meets the Gold of the Day”. Einstein let the record play a few phrases then stopped the record player and asked,

“Will you tell me please what you have just heard?” The simplest answer seemed to be to sing the lines, which he did.

The expression on Einstein’s face was like the sunrise. “You see!” he cried with delight when he was finished. “You do have an ear!”

He mumbled something about being one of his favorite songs, something he had heard hundreds of times, so that it didn’t really prove anything.

“Nonsense!” said Einstein. “It proves everything! Do you remember your first arithmetic lesson in school? Suppose, at your first contact with numbers, your teacher had ordered you to work out a problem in, say, long division, or fractions. Could you have done so? No, of course not. Precisely!” Einstein made a triumphant wave with his pipe stem.

“This simple, charming little song is like simple addition or subtraction. You have mastered it. Now we go on to something more complicated.” He found another record and set it going. The golden voice of John McCormack singing “The Trumpeter” filled the room. After a few lines Einstein stopped the record.

He did with a good deal of self-consciousness but with, for him, a surprising degree of accuracy. Einstein stared at him with a look on his face that his father had as he listened to him deliver his valedictory address at his high school graduation.

“Excellent !” Einstein remarked when he finished. “Wonderful! Now this!”

‘This’ proved to be Caruso in what was to him a completely unrecognizable fragment from “Cavaleria Rusticana”. Nevertheless, he managed to reproduce an approximation of the sounds the famous tenor had made. Einstein beamed his approval.

Caruso was followed by at least a dozen others. He could not shake the feeling of awe over the way this great man, into whose company he had been thrown by chance, was completely preoccupied by what they were doing, as though it were his sole concern.

They came at last to recordings of music without words, which he was instructed to reproduce by humming. When he reached for a high note, Einstein’s mouth opened and his head went back as if to help him attain what seemed unattainable. Evidently he came close enough, for he suddenly turned off the phonograph.

“Now, young man,” he said, putting his arm through Jerome’s. “we are ready for Bach!”

As they returned to their seats in the drawing room, the players were tuning up for a new selection. Einstein smiled and gave a reassuring pat on his knee. “Just allow yourself to listen,” he said. “That is all.”

It wasn’t really all, of course. Without the effort he had just poured out a total stranger he would never have heard, as he did that night for the first time in his life. Bach’s “Sheep May Safely Graze.” When the concert was finished Jerome was able to add his applause to that of the others.

He has heard it many times since and will never tire of it. Because he never listens to it alone. He is sitting beside a small, round man with a shock of untidy white hair, a dead pipe clamped between his teeth, and eyes that contain in their extraordinary warmth all the wonder of the world.

~ by Jerome Weidman who is author of the book, “I can get it for you wholesale” ~

2 thoughts on “Einstein’s Warmth and Wonder”