It was time for me to do my “Dollar Store” run, which included light bulbs, paper towels, trash bags and Clorox. So off I go. 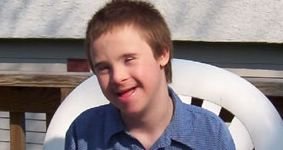 I scurried around the store, gathered up my goodies, and headed for the checkout counter only to be blocked in the narrow aisle by a young man that appeared to be about sixteen-years-old.

I wasn’t in a hurry, so I patiently waited for the boy to realize that I was there. This was when he waved his hands excitedly in the air and declared in a loud voice,

It was obvious now, he was mentally challenged, and also startled as he turned and saw me standing so close to him, waiting to squeeze by. His eyes widened and surprise exploded on his face as I said,

“My name is Denny and I’m shopping with my mother,” he responded proudly.

“How old am I now Mommy?” he asked his mother as she slowly came over from the next aisle.

“You’re fifteen-years-old Denny. Now be a good boy and let the man pass by.”

I acknowledged her and continued to talk to Denny for several more minutes about summer, bicycles and school. I watched his brown eyes dance with excitement because He was the center of someone’s attention. He then abruptly turned and headed toward the toy section.

Denny’s mom had a puzzled look on her face and thanked me for taking the time to talk with her son. She told me that most people wouldn’t even look at him, much less talk to him.

I told her that it was my pleasure and then I said something. I have no idea where it came from, other than by the prompting of the Holy Spirit. I told her that there are plenty of red, yellow and pink roses in God’s garden, however, “Blue Roses” are very rare and should be appreciated for their beauty and distinctiveness.

She was silent for a second, then with a tear in her eye she asked,

“Who are you?” Without thinking I said,

“Oh, I’m probably just a “daffodil or maybe even a dandelion,” but I sure love living in God’s garden.

~ The author is Pastor Hal Steenson and this is a real life story of his which took place July 12, 2006. Pastor Steenson is a Charismatic Pastor for over twenty years and has served in numerous areas of ministry at 3abn.org He takes calls from people looking for God’s answers to tough questions and considers himself blessed to be a part of a great Pastoral team that is placed in concert by God to meet the prayer needs of hurting people. ~