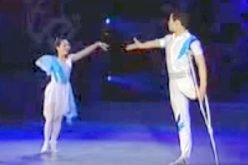 When I was in China, I saw a Chinese modern dance competition. One couple won the top prize. The lady had one arm and he had one leg. They performed gracefully and beautifully.

The lady was a dancer and was trained as one since she was a little girl. As a teenage she got into an accident and lost her left arm and was depressed for a number of years.

Later in her 20s she was asked to coach a children’s dancing group and from that point on, she realized she could not forget dancing. She still loved to dance. She wanted to dance again.

So she started to do some of her old routines. But by her losing an arm, she also lost her balance. It took her a while before she could even make simple turns and spins without falling. With persistence she became better and better.

She heard of a man in his 20s that had lost his leg in an accident. He also fell into the usual denial, depression and the emotional roller coaster of anger. She was able to locate him in another province and after much conversation persuaded him to dance with her.

He had never danced. And to dance with one leg? Are you joking with me? No way. But she didn’t give up. He reluctantly agreed.  “I have nothing else anyway,” he said.

She started to teach him Dancing 101. The two broke up a number of times because he had no concept of how to use his muscles, control his body, or even the basic dancing steps.

They hired a choreographer to design routines for them. She would fly high being held by him flying in the air with both his arms while she had only a sleeve for one arm.

He could bend horizontally supported by one leg with a crutch for the other and she leaning on him. They danced beautifully and on their own merits beat the others in the competition.