It is 1936. American Jesse Owens seems sure to win the long jump competition in the Olympic games. The previous year he had jumped 26 feet, 8 1/4 inches — a record that would stand for 25 years. 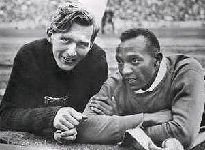 As he walks to the long-jump pit, Owens sees a tall, blue eyed, blond German taking practice jumps in the 26-foot range. Owens feels nervous. He is acutely aware of the Nazis’ desire to prove “Aryan superiority.”

On his first jump, Owens inadvertently leaps from several inches beyond the takeoff board. Rattled, he fouls on his second attempt, too. One more foul and he will be eliminated. At this point, the tall German introduces himself as Luz Long.

“You should be able to qualify with your eyes closed!” he says to Owens.

Since the qualifying distance is only 23 feet, 5 1/2 inches, why not make a mark several inches before the takeoff board and jump from there, just to play it safe?

Owens does and qualifies easily. In the finals Owens sets an Olympic record and earns the second of four gold medals. But who is the first person to congratulate him? Luz Long — in full view of Adolph Hitler.

Owens never again sees Long who is later killed in World War II. Hitler exempted all of the German Olympic athletes, except for Luz Long because he had befriended Jesse Owens.

“You could melt down all the medals and cups I have,” Owens later writes, “and they wouldn’t be a platting on the 24-carat friendship I felt for Luz Long.”

Luz Long taught the world a valuable lesson. Someone else put it like this:

“We can learn a lot from crayons. Some are sharp…some are pretty…some are dull… some have weird names…and all are different colors. But they all have to learn to live in the same box.”